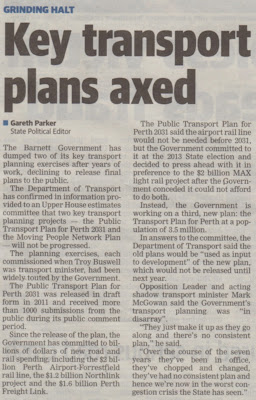 What a wonderfully-horrifying (and depressing) trifecta of reports juxtaposed in today's West Australian, clearly demonstrating the lack of consistent principle and planning in today's politics at both state and federal levels.

First, there is the report that all transport planning that has been in progress for the past six years under this government is to be dumped ('Key transport plans axed') - almost certainly because the planners have not been coming up with the answers the Premier wants. The replacement plans, of course, won't be finished before the next election, when everything will change yet again.

One of Australia's most respected transport professionals, over 30 years ago, described this state of affairs as 'Planning as a substitute for action'. Some things never change.

Then we have the medical profession calling for more cycleways ('Build more cycleways to stay healthy'), to encourage people to get on bikes and improve their health through exercise. Ironically, this is one area where the WA Government has produced a plan - but unfortunately its funding of it is so woefully inadequate that it will take decades to implement.

And then there is the Federal ALP which, rightly in our view, has agreed to support the Government's fuel excise indexation rather than see the revenue raised so far go back to the oil companies ('Fuel price up twice a year') - but, wrongly in our view, has effectively agreed to all of it being spent on roads rather than on a multi-modal approach to addressing congestion in our cities. 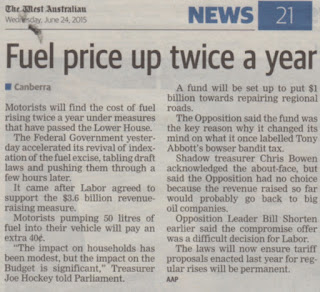 Written and Posted by Ian Ker, Convenor, STCWA
Posted by Unknown at 12:55